Nowhere to Hide, Joe:
President Adopts Fetal Position as He Crumbles Under Questioning and Tries to Blame Trump for Afghanistan Catastrophe After 13 Troops Were Killed Along With 90 Afghans in ISIS Bomb Attacks 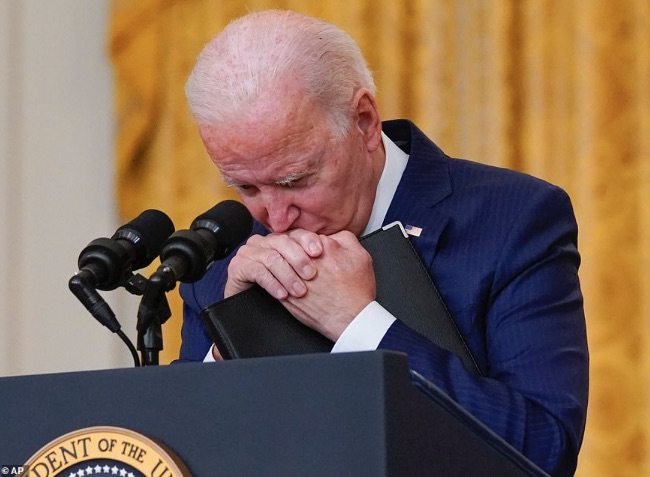 Joe Biden crumbled when confronted by reporters with the deaths of 13 troops and 90 people who were slaughtered at Kabul airport on Thursday by two ISIS bomb attacks in the latest tragic episode of his disastrous withdrawal from Afghanistan.

The 78-year-old President was lost for words at times and and frustrated in others, gripping his notebook and widening his eyes while reporters from a pre-approved list asked him questions for about 30 minutes.

The press conference was at 5pm, nearly eight hours after the two blasts. Biden said nothing all day before the briefing.

When pressed, accepted responsibility for the violence but still stood by his decision to withdraw troops hastily while thousands of Americans remained in the country.

He then tried to blame it all on former President Donald Trump, who made the initial decision to withdraw.

Trump has since claimed the attacks on Thursday would not have happened on his watch, because ISIS and the Taliban were too afraid of the force he would use in retaliation. He has also slammed Biden's team for giving the Taliban a list of Afghan allies they said should be evacuated, calling it a 'kill list' for a group of terrorists who may end up killing them in revenge for their cooperation with the US in the war.

Biden has vowed to hunt down the killers responsible but in the meantime, he still has to get nearly 1,000 Americans out of the country before August 31 - a deadline the Taliban is insisting on.

He didn't know about the kill list when asked at the press conference, but said it 'could exist'.

As has become the norm for Biden, he was given a list of pre-approved journalists to call upon at the press briefing.

REPORTER: "Do you think people have an issue with pulling out of Afghanistan or just the way that things have happened?"
WATCH VIDEO HERE