It took just one round of voting for the Haywood County Republican Party to select Jennifer Best as the next county commissioner. The Canton cattle producer and Farm Bureau insurance salesperson came in a close third in the 2020 GOP commissioner primary, and handily distinguished herself in a field of seven candidates vying to replace outgoing Commissioner Mark Pless. 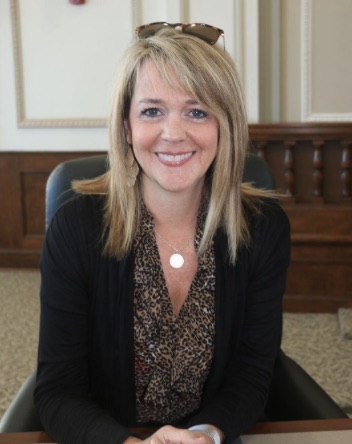 "It’s been 15 long months," Best said, noting even after she failed to become the GOP nominee this spring, individuals on a regular basis would ask if she would run again and express support. "I felt I had things I wanted to accomplish and to be a part of, so it was hard to dismiss the idea."

As the GOP choice, Best will be appointed once Pless, who won his race for N.C. House District 119 this November, resigns his county post, which hasn't yet happened. The county commissioners ultimately make the appointment to fill unexpired terms, (Pless has two years left on his), but must choose the candidate selected by the same political party as the departing incumbent. Others vying for the job included Terry Ramey, who also ran for the post in the primary; Ronnie Clark, who was just re-elected to the school board; Todd Bradley, Hylah Birenbaum, Jeff Sellers and Twinkle Patel. Paul Turner put his name in the hat early on but later dropped out, said Kay Miller, Haywood County GOP chairwoman.

"We got a winner on the first go-around," Miller said, noting she was prepared to hold several votes based on the number of candidates and rules voted on at the beginning of the executive board meeting Thursday. Those rules stipulated the person ultimately selected would need to to garner 50% of the vote plus one. There were 24 individuals present at the meeting qualified to cast a vote, a task that fell to the party's executive board that includes officers and precinct chairpersons. Best received 14 votes on the first ballot, which led to a clean win. Sellars received 10 votes.

"Everything went very well," Miller said after the vote. "I wanted the process to be open, and everyone was very agreeable to that. Now we have the first GOP woman ever on the Haywood board of commissioners."

Best will assume the office once Pless resigns his post, something that must happen before the second week in January when he is sworn in as a state legislator.

"When I started hearing Mr. Pless was gaining ground, and then when he won," Best said, "I waited one day after the election to let the party know I wanted to put my name in the hat.” Best has long touted the need for economic development in Haywood. "If we bring industries and companies into our area who can provide jobs for families, it increases what we can do in our community," she said.

Best has had conversations with most of the current commissioners as part of her second campaign for the county post and recognizes there are big decisions on the horizon. She said she believes all on the board want the same thing — to move Haywood forward, and it's a vision she shares.