Read complete article below the photo.... 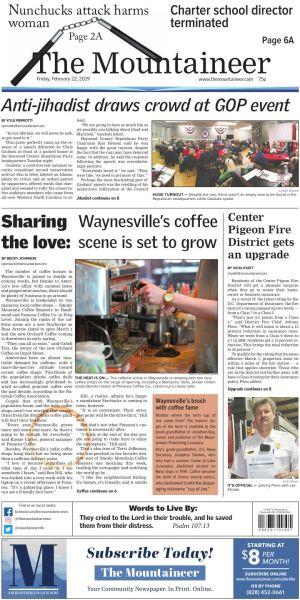 STERN WARNINGS — Gaubatz offered several examples of what he considers to be an infiltration at all levels of government by Marxists and jihadists.

“In our lifetime, we will never be safe, so get used to it.”

This quote perfectly sums up the essence of a speech delivered by Chris Gaubatz in front of a packed house at the Haywood County Republican Party headquarters Tuesday night.

Gaubatz, a controversial national security consultant turned conservative activist who is often labeled an Islamophobe by critics and an ardent patriot by supporters, offered words that energized and seemed to rally the conservative audience members who came from all over Western North Carolina to attend.

“We are going to have as much fun as we possibly can talking about jihad and Marxism,” Gaubatz joked.

Haywood County Republican Party Chairman Ken Henson said he was happy with the great turnout, despite the fact that the rain may have deterred some. In addition, he said the response following the speech was overwhelmingly positive.

Perhaps the most fascinating part of Gaubatz’ speech was the retelling of his undercover infiltration of the Council on American-Islamic Relations (CAIR) — an organization Gaubatz referred to as a jihadist group — during which he posed as a Muslim convert to gain an internship. The operation was led by Gaubatz’ father, an Air Force veteran who later worked numerous undercover operations as a civilian. The findings were the basis of the book “Muslim Mafia,” which Gaubatz’ father co-authored.

Most notably, Gaubatz, who has since testified in front of the U.S. Senate, said he recovered 12,000 pages of documents that illustrate CAIR’s illegal activity, which he said includes funneling money to jihadist terrorist organizations, when they decided in the face of legal scrutiny to shred the documents.

“Who do you think they give boring jobs like shredding documents to?” he asked those in attendance, many of whom gleefully responded with “the intern.”

Gaubatz said CAIR has made several efforts — including an ongoing lawsuit — to silence or discredit him.

“The main thing with CAIR is to smear me and try to get me shut down everywhere I go,” he said, adding that they “almost always” send emails to local media trying to cancel his speaking engagements. The Mountaineer received no such email.

“Obviously, you can tell I was raised by a patriot, and I could care less what CAIR does,” he added, eliciting a raucous round of applause.

In Gaubatz’ dynamic speech, which punctuated heavy points with light jokes, facts were woven together to make broad statements about groups he said are actively working together to undermine our country’s government at all levels. He specifically spoke about one man who had the ear of presidents in the ‘90s but was later revealed to be a key financier of Al Qaeda.

“If Al Qaeda can get someone to visit the White House more than anyone else, what do you think they can do with local police, local mayors, local pastors?” he asked.

Gaubatz explained that jihad isn’t carried out only on the battle field or through violent terrorist attacks.

“It’s not just shooting things and blowing things up,” he added. “It’s total warfare. And that means political influence operations, meaning media manipulation propaganda, interfaith dialogue so that when a member of a congregation wants to speak up about a threat in the community, it’s the pastor oftentimes that is shouting them down and calling them an Islamophobe because of their interfaith dialogue that they’ve been doing.”

Although Gaubatz never cited the Koran itself, he used multiple Islamic law books he said could be found in the CAIR office to heighten people’s fear of Islam, including one that defined Jihad not as an “inner struggle,” but “warfare against all non-Muslims.”

“Am I the Islamophobe, or am I just reading from a book of Islamic law?” he asked rhetorically.

Although Gaubatz spent less time talking about Marxists than he did Jihadists, his words on the threat of communism were no less alarming. He highlighted his belief that Marxists have invaded America’s universities, public schools, and even local governments.

In addition, Gaubatz said that 44 percent of millennials think that socialism is better than capitalism. He said the Marxists, which he believes are overtaking the Democratic Party, are not to be taken lightly.

“They are incredibe at organizing,” he said. “The left, the Marxists.”

One of Gaubatz’ conclusions was that, although their ultimate goals may differ, jihadists and Marxists will work together to undermine this country’s government with the sole aim of revolution.

Along with talking about jihadists and Marxists, Gaubatz focused heavily on the media, especially national outlets such as CNN and MSNBC that tend to receive criticism from conservatives who call those networks biased.

“They are nothing more than propagandists for the DNC,” he said, adding that they are influenced by jihadist groups, as well.

As grim as some parts of the speech were, Gaubatz painted President Donald Trump to be a ray of light in a dark place.

Gaubatz especially had praise for the way Trump has carried himself despite what he considers a vicious onslaught of mainstream media attacks.

“If he can do that at the national level and take a beating, surely we can stand up and take a few bad names called to us by the media,” he said. “Our side is so worried about being called a bad name or having a negative news story written about us.”

“They did it to President Trump and he still won, so maybe we should be more concerned about our relationship with God and our neighbors than we are about the media,” he added.

At one point, Gaubatz made sure the crowd understood that he was talking about those wanting to enact Sharia law and not all Muslims.

“Not every person that self-identifies as a Muslim is a threat to this country,” he said. “Many Muslims left lands that were under Sharia to escape oppression.”

However, during other parts of his speech — and especially during the question and answer portion of the evening — he made more generalized statements.

For example, when asked about the difference between Sunni and Shia Muslims, his answer was that when it comes to non-Muslims, various schools of Islamic thought are essentially the same because they all want to wage jihad.

“Will they fight each other? Absolutely. Will they team up to fight us? Absolutely,” he said.

“I don’t care that they don’t agree on how long a beard can be, they all agree that they need to wage jihad against us,” he said.

Gaubatz also offered his thoughts on our children’s “indoctrination,” as well as how Muslims will leverage their religion against everyone, including employers if given the chance.

“There’s this big push, world hijab day, and schools are doing this where they want children to wear hijabs to feel what it’s like,” he said. “First of all, have we ever done what it feels like to be a Christian day at school? Because it feels like we’re being ripped out. We’re a Judeo-Christian nation, but that’s been driven out. The only prayer allowed in school now is Islamic prayer. Crazy how that works, huh?”

“They do this to make sure employers will kowtow to them at every point,” he said of allowing prayer at work. “Understand this, I just want you to ask yourself, imagine if Christians all over the country started saying I need to stop working right now to pray. How many bosses would be OK with that? It just goes to show this level of fear. It’s just an observation.”

When one person asked whether or not Gaubatz thought former President Barack Obama was a Muslim, he didn’t offer an opinion on the matter, but wasn’t shy about offering his opinions on Obama in general.

“I don’t know, and I don’t care,” he said. “His policies were very supportive of the hard left and Marxist movement. That shouldn’t be a shock to anybody, by the way. The Muslim brotherhood couldn’t have had a better candidate than Obama.”

Ultimately, Gaubatz tied his points together in a call for action and prayer at the local level, saying that true patriots need to be courageous and show perseverance in the face of the growing progressive opposition.

“The next few elections are about the base energizing people to come out,” he said. “Whatever base gets their people energized and motivated is the one that’s going to win. This means we stand firm, we stand strong, and understand, the more you get involved in this, the more people are going to call you names. Oh well, get used to it.”

"If Al Qaeda can get someone to visit the white house more than anyone else, what do you think they can do with local police, local mayors, local pastors."