We are pleased to host Mr. Chris Gaubatz, a national security consultant, speaker, and conservative political activist. Please share this information and invite others to attend.

Mr. Gaubatz also trains law enforcement on the severity and dangers of the jihadi network in the U.S., detailing the strategies and modus operandi of the jihadis (“terrorists”) while providing specific investigative guidance by showing them how to locate and prosecute terrorists, and working with citizens, legislators, and leaders at the state and local level to create strategies to expose and dismantle these networks.

Chris Gaubatz has testified before the United States Senate on issues relating to the consequences of agency efforts to de-emphasize radical Islam in combating terrorism. Transcripts from his Congressional testimony can be found at: https://www.judiciary.senate.gov/download/06-28-16-gaubatz-testimony

As the lead undercover researcher in one of the most successful post-9/11 undercover operations in the United States, Gaubatz posed as a Muslim convert and gained access to Muslim Brotherhood and Hamas-backed organization leadership meetings. While undercover, he preserved more than 12,000 pages of evidence and 300 hours of covert audio/video recordings from the Council on American-Islamic Relations (CAIR) headquarters, revealing clear patterns of fraud, sedition, and terrorism. This undercover operation is the feature of Muslim Mafia, a book authored by investigative journalist Paul Sperry and Dave Gaubatz, Chris’ father, a career federal counter-intelligence agent and first civilian US federal agent to enter Iraq in 2003.

Seating is limited.
Feel free to print the flier below to give to friends and family. 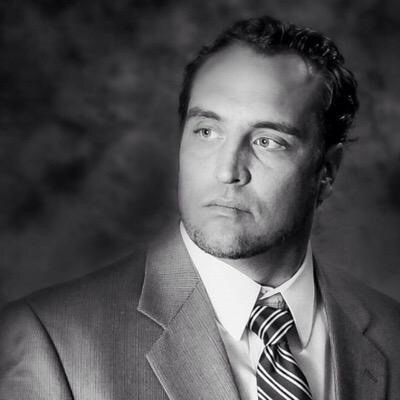 Paid for by the Haywood County Republican Executive Committee
Feel free to print the flier below to give to friends and family.
https://haywood.nc.gop/news_national_security_briefing_jihad_in_america 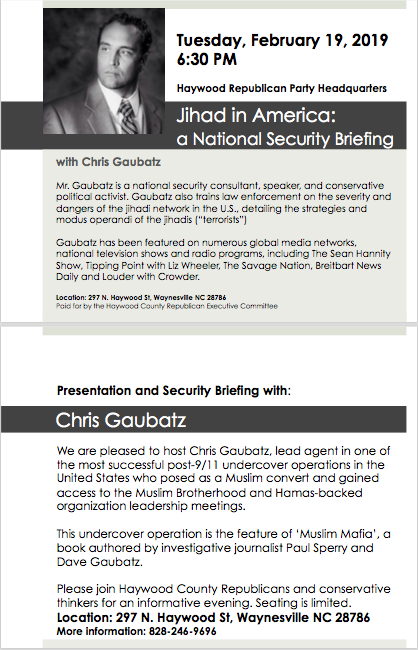